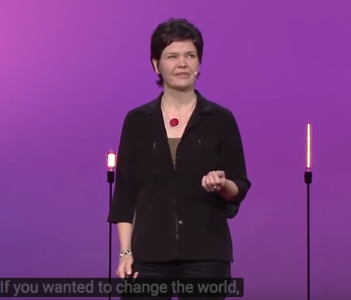 Kate Raworth is an economist focused on the rewriting of economics to make it fit for addressing this century’s realities and challenges. She is the creator of the doughnut of social and planetary boundaries which, since being first published by Oxfam in 2012, has gained widespread international recognition and influence in reframing sustainable development, including shaping the United Nations’ post-2015 Sustainable Development Goals. She is currently writing Doughnut Economics: seven ways to think like a 21st century economist, to be published by Random House in Spring 2016. Kate is a senior visiting research associate and lecturer at Oxford University’s Environmental Change Institute, and a senior associate of the Cambridge Institute for Sustainability Leadership. She has presented doughnut economics widely – from the UN General Assembly to the Occupy Movement – and her writing has featured in The Guardian, The New Statesman, Resurgence, Nature Climate Change, and Wired. She has been named by The Guardian as “one of the top ten tweeters on economic transformation”. Over the past two decades she was senior researcher at Oxfam, co-author of the UN Human Development Report, and a fellow of the Overseas Development Institute in Zanzibar. She holds a first class BA in Politics, Philosophy and Economics and a MSc in Economics for Development, both from Oxford University.