Toward an Epistemological Foundation for Social and Solidarity Economy

Occasional Paper 3. Potential and Limits of Social and Solidarity Economy 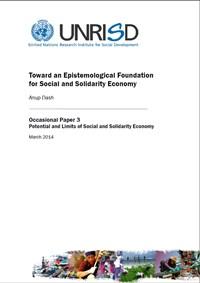 In the absence of conceptual advances with strong ontological foundations, the author argues, social and solidarity economy (SSE), a science-in-the-making, cannot go very far in framing discourses and in engaging with the bigger picture, as an alternative to the crises-ridden “dominant economic paradigm”. The orthodox economics, with its ontological construct of the “homo economicus” and logical positivist epistemology, severely constrains our ability to imagine economic alternatives, through which local communities can rebuild their fractured lives, regenerate their local economies, restore their social and ethical values, and carve out their own democratic space and a more sustainable and better future; in short, put a “moral brake on capitalism”. Thus, the context today holds great promise for an epistemological revolution to construct a coherent theoretical framework for SSE with a strong explanatory power, which would enable us to gain the confidence to think of SSE more boldly and to develop SSE as a new scientific theory for explaining, organizing and developing well-governed sustainable institutional practices with a fundamental change in the intent and content of our economic life.

Origin of the document :